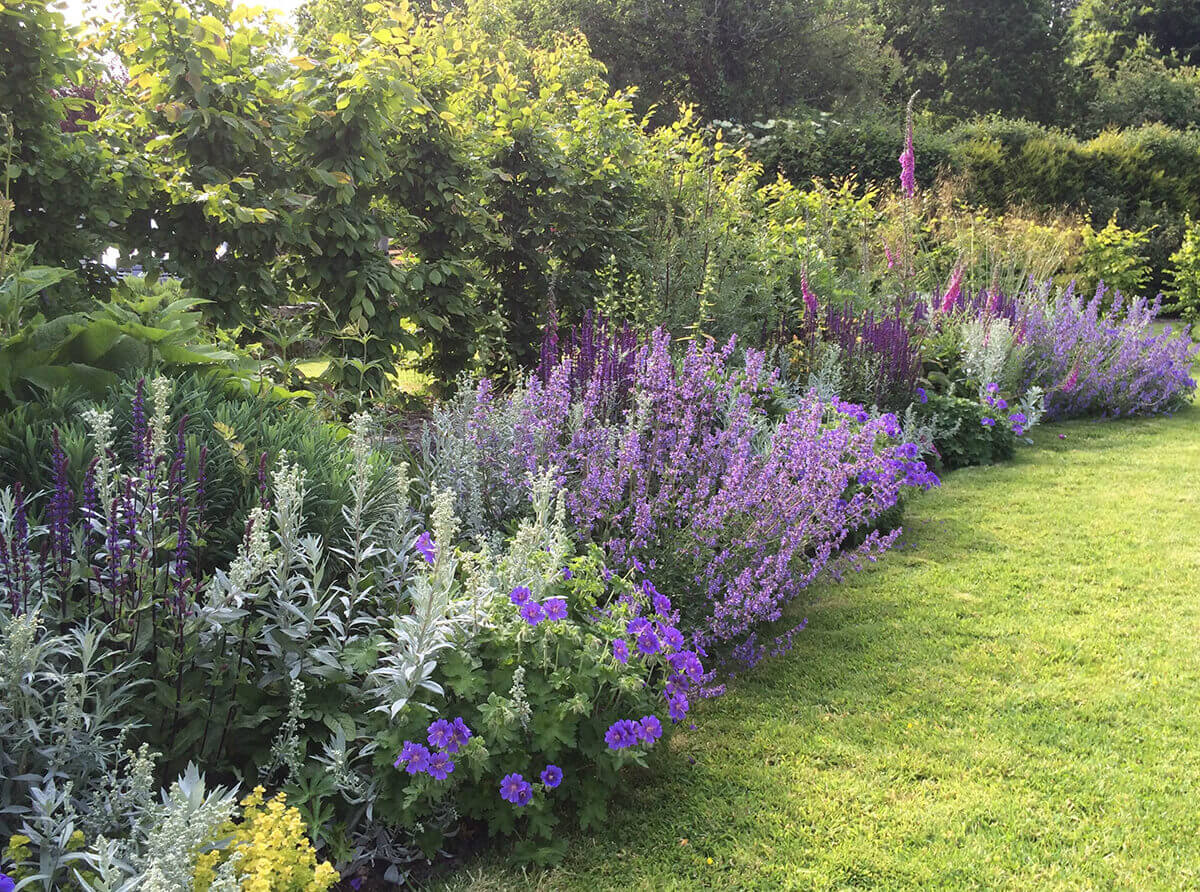 I was approached in the winter of 2013 by a family living in a converted barn with extensive views over wonderful rolling Devon countryside. The landscape included orchards, streams, lakes and woods – My favourite kind! The previous owners had filled in a swimming pool with a large flat slabbed patio which acted as an uninspired focal point.

The garden had huge potential, but was in need of integrating with what lay beyond. We decided to dig down where the swimming pool had been to recreate natural contours which reflect the wider undulating shallow valley and to provide a natural looking hollow where a bespoke green oak summer house could be positioned.

I liaised with architect Emma Heaver to produce a design which allowed the building to sit as unobtrusively on the site as possible. The level change has reduced the height of the building from other points in the garden, whilst the orientation captures the fantastic far-reaching views.

We introduced 9 ornamental pear trees to mediate between the tall barn and flat expanse of lawn and to introduce rhythm and provide an appropriate sense of scale. A tiny flower bed was replaced with a sweeping wow-factor herbaceous border backed by a dry stone wall which is a riot of yellows and blues in summer. Between the pear trees and the wall, a hornbeam hedge will knit together in time offering privacy from the Torbryan road as well as a foil to the planting.

In high summer the herbaceous border includes salvias, anthemis, nepeta ‘Walker’s Low’, yellow kniphofia and roses… Later in the season, the palette mellows with silver artemesias providing a subtle foil to the rudbeckias and crocosmia solfatare.

On the far side of the stream, an arboretum provides interest with bark, berries and leaves offering a changing tableau visible from the elevated kitchen throughout the seasons. 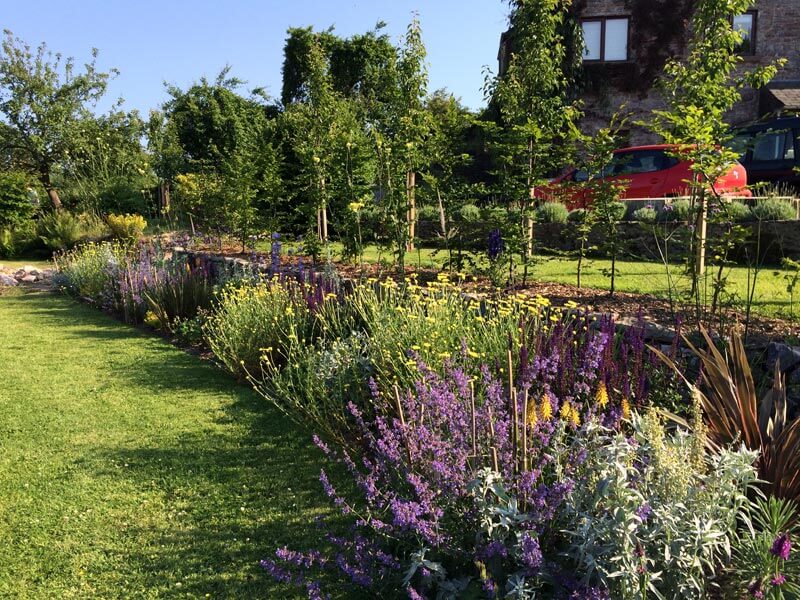 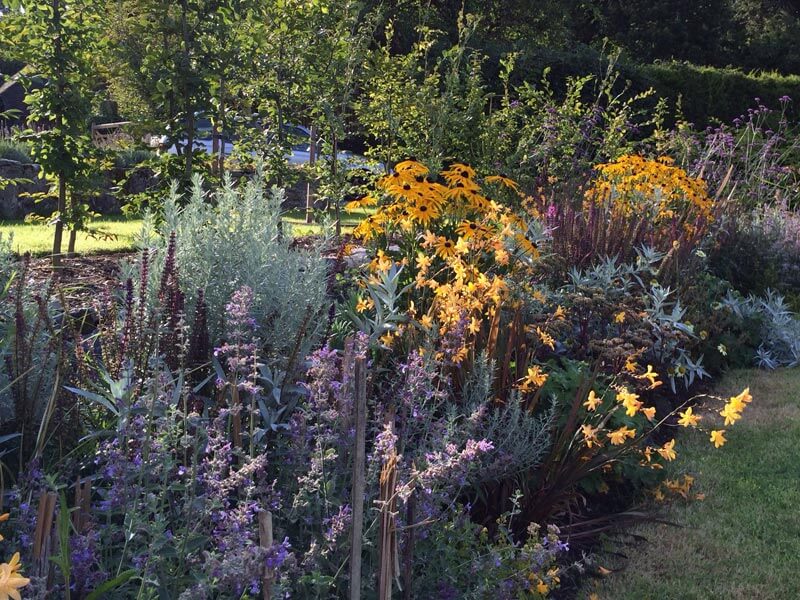 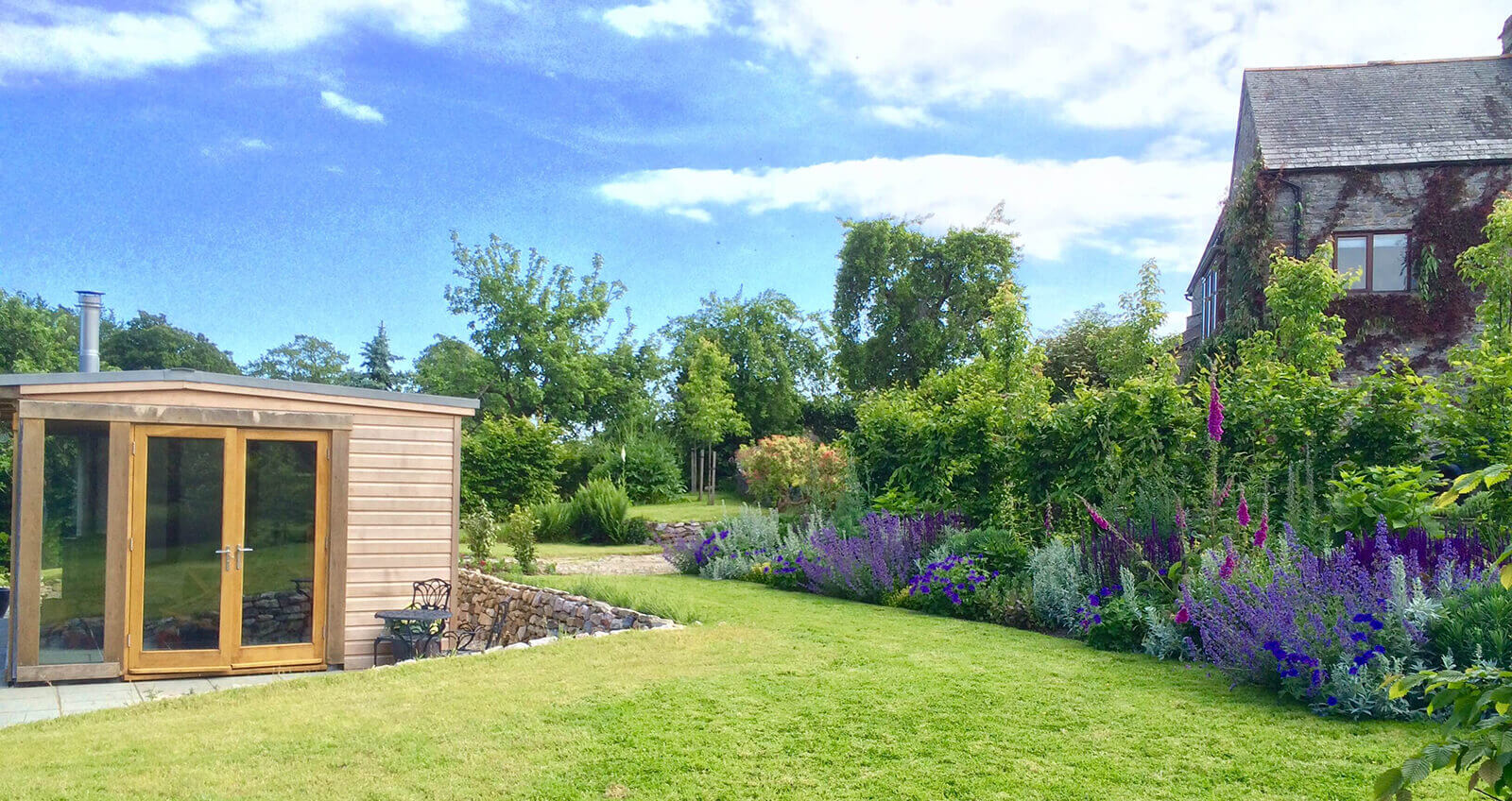 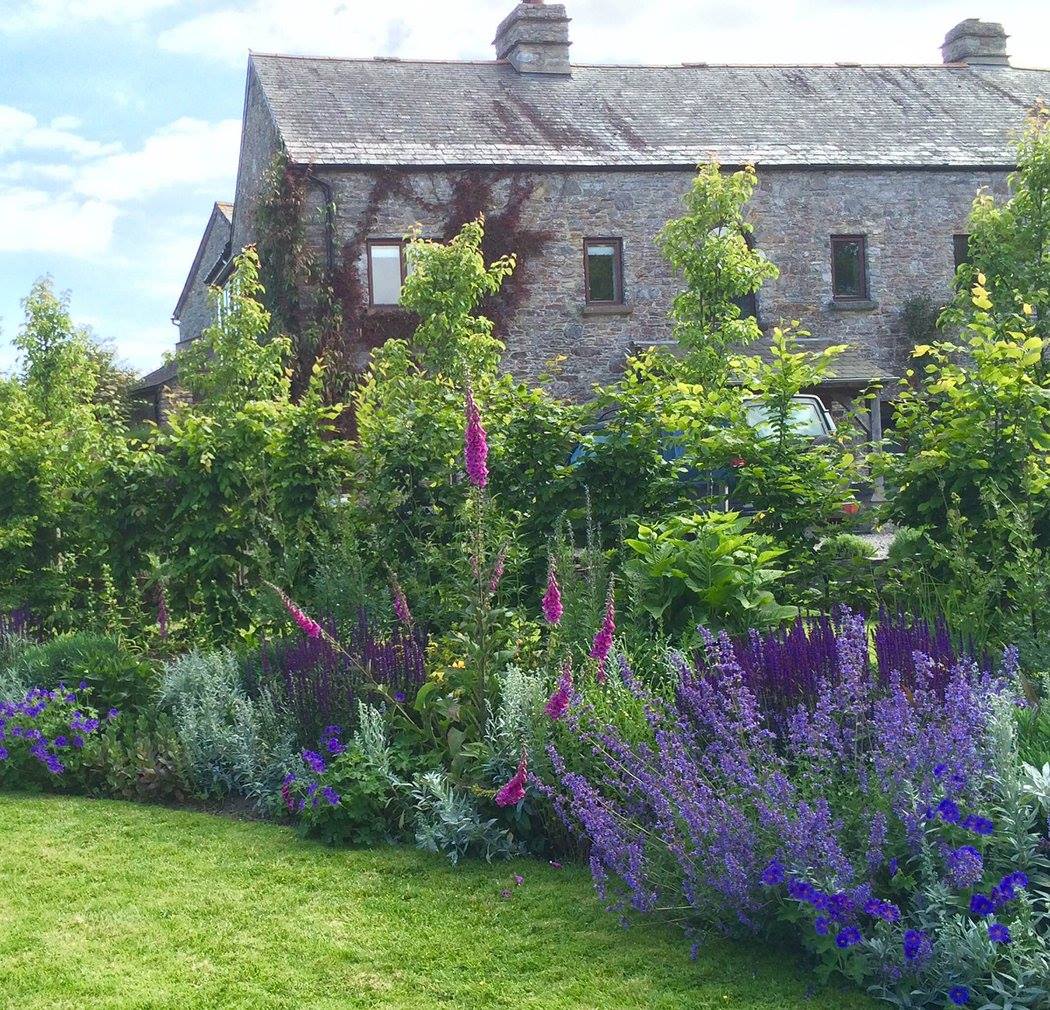 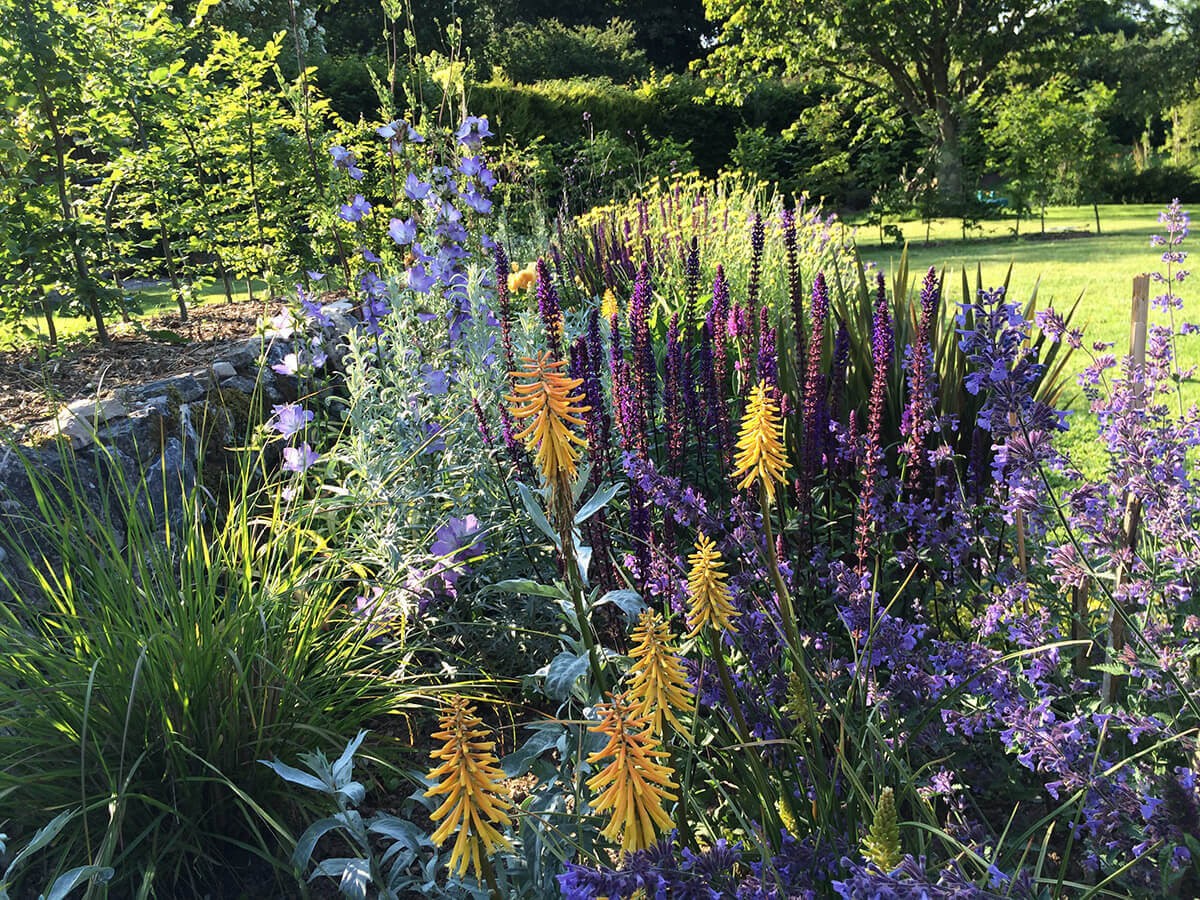 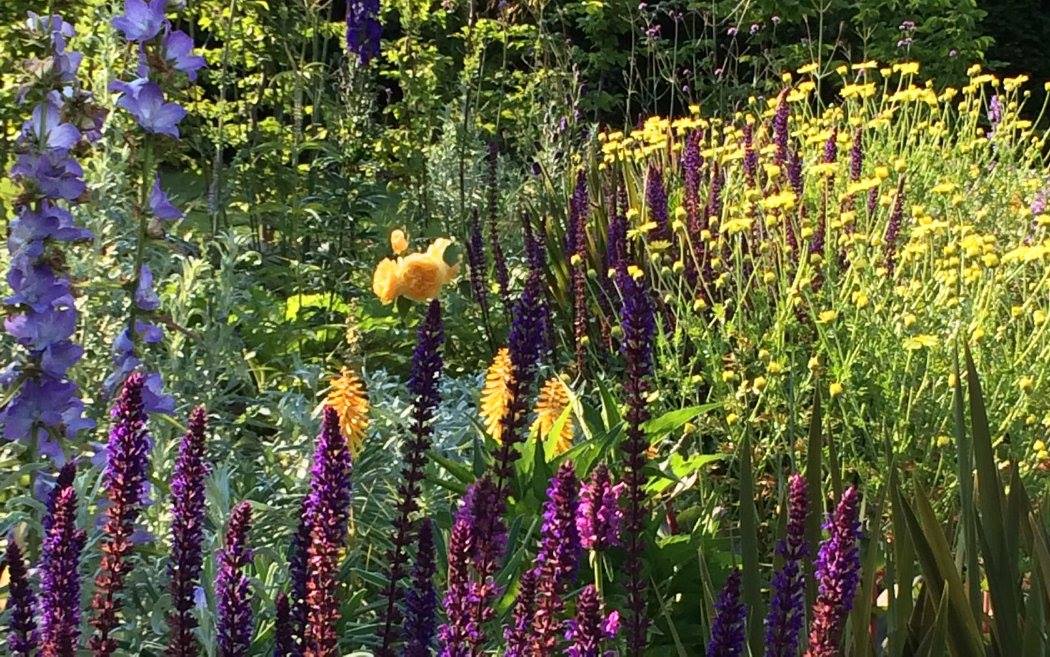 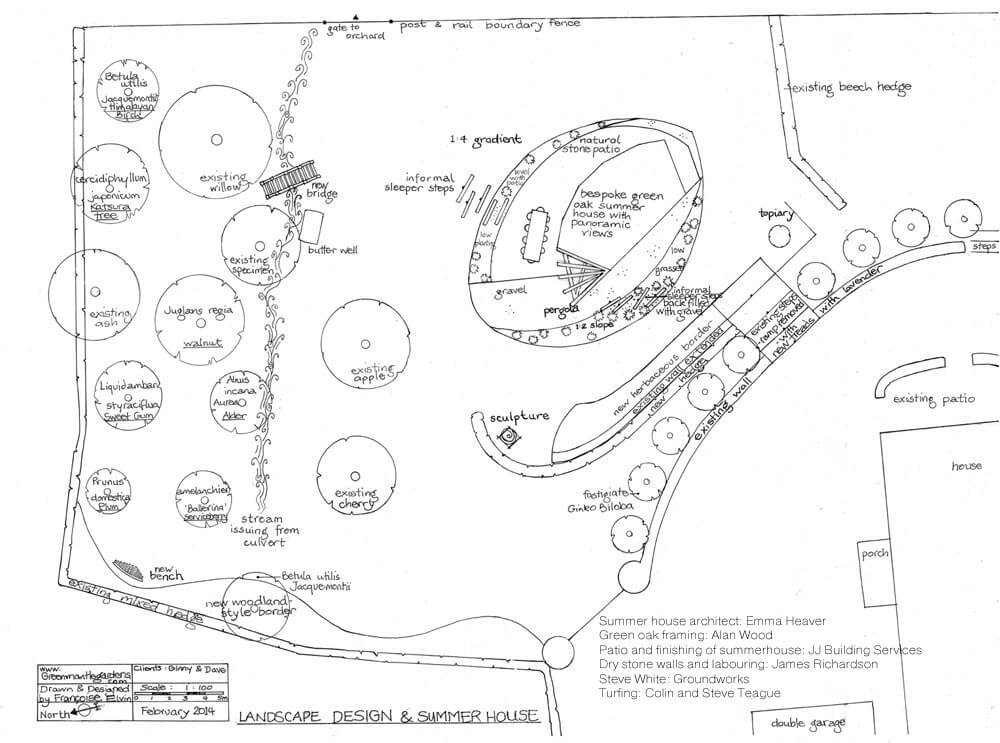